Meddbase’s pilot study with NHS Humber and North Yorkshire ICB on using technology to improve Diabetes prevention referrals has been featured in Pulse. Read the full article on Pulsetoday.co.uk. Ten-fold referral increase for diabetes prevention when eligible patients texted, finds study Texting patients to inform them of their eligibility to take part in the diabetes […] 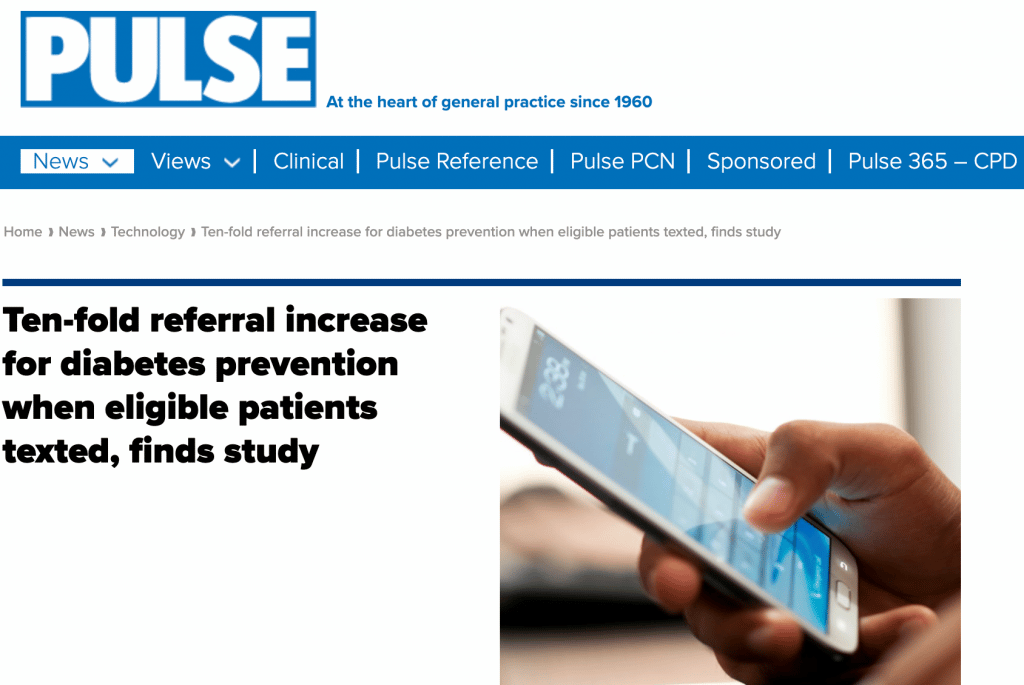 Meddbase’s pilot study with NHS Humber and North Yorkshire ICB on using technology to improve Diabetes prevention referrals has been featured in Pulse. Read the full article on Pulsetoday.co.uk.

Texting patients to inform them of their eligibility to take part in the diabetes prevention programme brought about a ten-fold increase in referrals, according to a pilot study.

Conducted by NHS Humber and North Yorkshire ICB, the intervention saw the number of patients referred to the NHS Diabetes Prevention Programme (NDPP) rise from 32 referrals per month to 363 (1,034%).

According to a study authors, the findings indicate how using technology at ICB-level can improve patient engagement without adding to GP workload.

The ICB identified 795 patients across four practices who were eligible for the NDPP, and sent automated texts over two weeks in January 2022 informing patients of their eligibility.

In addition to a spike in referrals, the study saw a 331% increase in the number of patients attending at least one session of the NDPP programme, rising from 16 patients to 69 in the first month of the study.

This continued over three months, with an average of 45 patients each month attending their first session, up by 181% on the baseline 16 per month.

The NDPP launched in 2015, and is typically accessed via GP referral, NHS Health Check or self-referral. It supports people with pre-diabetes to change their lifestyle, with data suggesting it can help cut a person’s chances of developing type 2 diabetes by 37%.

The authors said that although it is common for patient comms to be managed at practice level, it ‘might not be the most efficient or effective’ means, given the time-cost and expertise needed.

The study said: ‘Utilising technology to enable an ICB to invite patients from multiple GP practices at once also appears to have unlocked a number of efficiencies, saving GP practices time and money.’

It added that responsibility for the pilot sat with the ICB’s engagement officer ‘meaning that patients benefited without increasing the burden on GP practice staff’.

It also suggested that the software it used – Meddbase – allowed the ICB to quickly identify and invite patients, while also mitigating against the risk of digital exclusion.

Scott Walker, the ICB’s senior partnership officer for diabetes, said: ‘Previously, we had to wait to achieve the critical mass required to make our diabetes prevention programme viable, but we can now confidently say that we will have enough patients to start a group.

‘In fact, the success of the pilot has given us the confidence to bring in additional human resources to manage patient conversions.’

And Dr Tom Milligan, a GP and clinical lead for diabetes at the ICB, said: ‘This pilot enabled the ICB to conduct advanced searches for the first time, so they could identify, invite and refer patients that would otherwise have been missed.

‘The result was far greater uptake as well as significant time saved for clinical staff. ‘Given the current capacity challenges within general practice and the cost to the NHS of lifestyle-related conditions like type 2 diabetes to the NHS, the findings here could have a huge impact.’

The launch of the diabetes prevention programme has led to a 7% reduction in the number of new type 2 diabetes diagnoses in England between 2018 and 2019, representing around 18,000 people, NHS England said earlier this year.

The University of Manchester research also showed that completing the nine-month NHS programme reduces a patient’s chance of developing the condition by more than a third (37%), with patients seeing an average weight loss of 3.3kg.

Unless urgent action is taken to reverse rising case numbers, one in 10 adults will be living with diabetes by 2030, Diabetes UK warned last year.