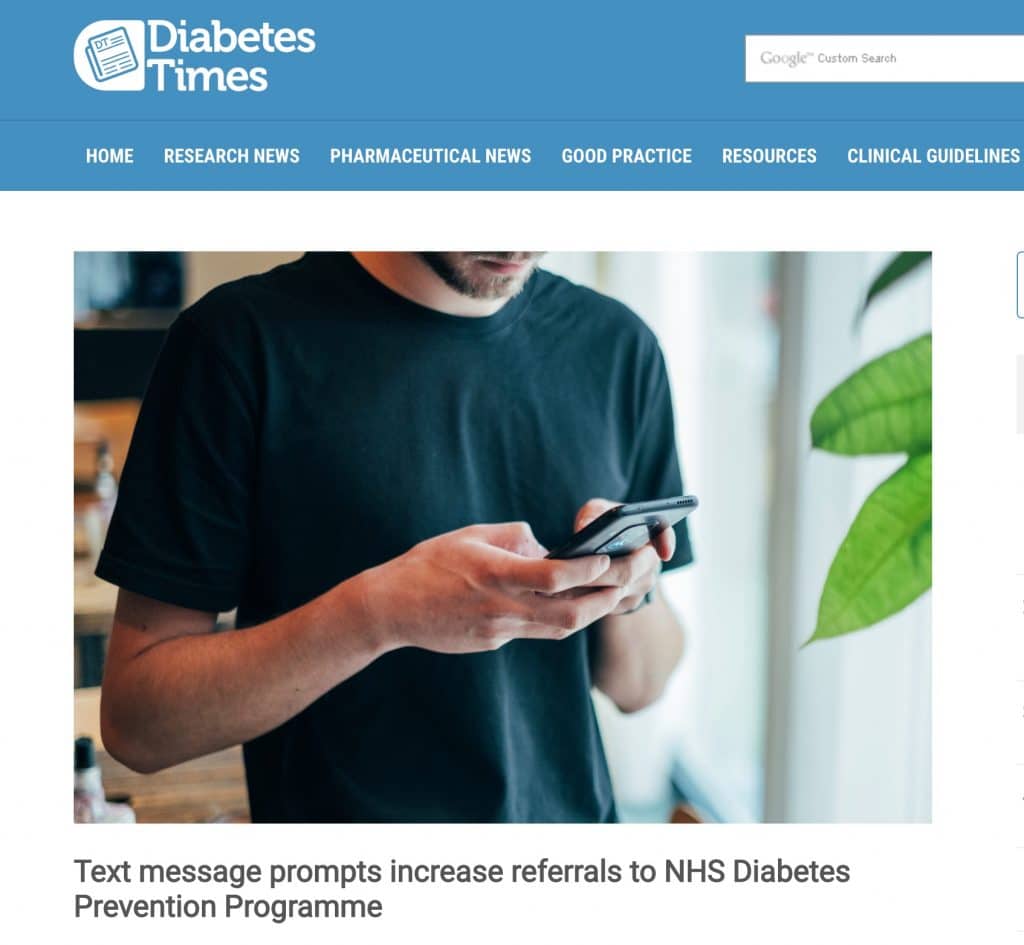 Meddbase’s pilot study with NHS Humber and North Yorkshire ICB on using technology to improve Diabetes prevention referrals has been featured in Diabetes Times. Read the full article on Diabetestimes.co.uk.

A pilot study of 795 people with prediabetes has shown the significant potential of ICB-managed text messaging to engage individuals with health intervention programmes.

According to the findings, text prompts led to a 1000 per cent increase in referrals to the NHS Diabetes Prevention Programme (NDPP).

The study was designed to explore whether using the latest digital communications software, and managing it at ICB-level, is more effective than traditional postal invites when it comes to engaging people in healthy lifestyle programmes.

The study was conducted by the NHS Humber and North Yorkshire Integrated Care Board, with support from its clinical technology partner Meddbase.

It found that using identification tools and automated text message prompts led to:

The results from the study and the key learnings for ICBs, including the importance of data quality and the need to facilitate choice, are explored in detail in a new white paper report, ‘It’s your GP texting: Utilising technology at ICB level to deliver a tenfold increase in referrals to the NHS Diabetes Prevention Programme’.

The findings demonstrate how utilising technology at ICB level has the potential to deliver huge increases in engagement in healthy lifestyle programmes, such as the NDPP.

The NDPP was developed by NHS England and Diabetes UK and offers people at risk of type 2 diabetes free support from an evidence-based lifestyle programme.

Approximately two million people in the UK are classed as having pre-diabetes, meaning they are likely to develop the condition if they don’t change their lifestyle.

To date, one million people have followed the programme, with data showing that it reduces the chances of developing diabetes by 37 per cent.

The study was conducted using software from Meddbase, an advanced clinical management provider.

The software was used to enable the ICB’s Engagement Officer to quickly identify eligible people, check them against criteria and then schedule text message prompts, while also capturing information to update Electronic Patient Records.

“Previously, we had to wait to achieve the critical mass required to make our diabetes prevention programme viable, but we can now confidently say that we will have enough people to start a group.”

He added: “In fact, the success of the pilot has given us the confidence to bring in additional human resources to manage conversions. That’s the beauty of this solution – the untapped potential is huge.”

Dr Tom Milligan, a GP and the Clinical Lead for Diabetes in Humber and North Yorkshire, said: “Before this study, I thought we were doing NDPP referrals well, but in fact we were missing hundreds of people with pre-diabetes.

“The software used for this pilot enabled the ICB to conduct advanced searches for the first time, so they could identify, invite and refer individuals that would otherwise have been missed.”

He added: “The result was far greater uptake of the NDPP as well as significant time saved for clinical staff.

“Given the current capacity challenges within general practice and the cost to the NHS of lifestyle-related conditions like type 2 diabetes to the NHS, the findings here could have a huge impact.”

Erin Johnston, NHS Product Owner at Meddbase, said: “It has been exciting to work with colleagues at the NHS Humber and North Yorkshire ICB on this pilot, which has achieved brilliant results using our innovative clinical management software to reach people at-scale as part of an effective and efficient programme.

“The outcome clearly shows that a strategic ICB-managed approach to communications, supported by the right kind of clinical management software, can have a significant impact on uptake of healthy lifestyle programmes.”