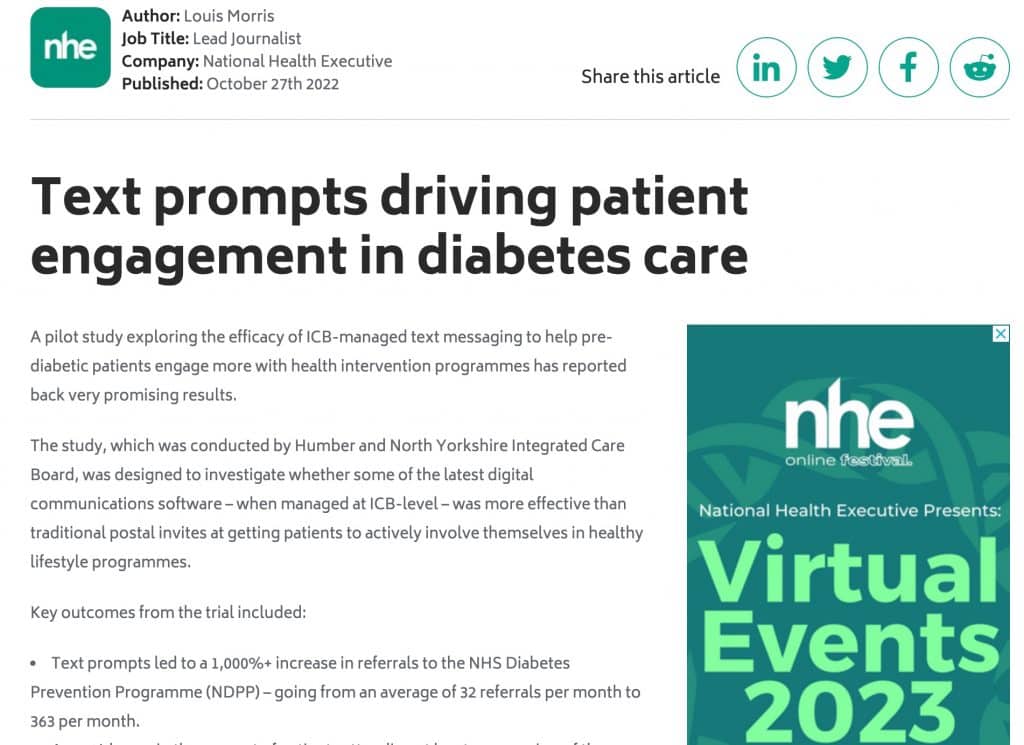 The study, which was conducted by Humber and North Yorkshire Integrated Care Board, was designed to investigate whether some of the latest digital communications software – when managed at ICB-level – was more effective than traditional postal invites at getting patients to actively involve themselves in healthy lifestyle programmes.

Key outcomes from the trial included:

Dr Tom Milligan, a GP and the Clinical Lead for Diabetes in Humber and North Yorkshire, said: “Before this study, I thought we were doing NDPP referrals well, but in fact we were missing hundreds of patients with pre-diabetes. The software used for this pilot enabled the ICB to conduct advanced searches for the first time, so they could identify, invite and refer patients that would otherwise have been missed.

“The result was far greater uptake of the NDPP as well as significant time saved for clinical staff. Given the current capacity challenges within General Practice and the cost to the NHS of lifestyle-related conditions like type 2 diabetes to the NHS, the findings here could have a huge impact.”

Ultimately, the findings demonstrate the effectiveness of digital technology when trying to encourage patient engagement and how it can drive participation in healthy lifestyle programmes, such as the NDPP.

Also commenting on the pilot, Scott Walker, Senior Partnership Officer (Diabetes) at NHS Humber and North Yorkshire ICB, said: “We’ve seen phenomenal success with this pilot, which was driven by user need. Previously, we had to wait to achieve the critical mass required to make our diabetes prevention programme viable, but we can now confidently say that we will have enough patients to start a group.

“In fact, the success of the pilot has given us the confidence to bring in additional human resources to manage patient conversions. That’s the beauty of this solution – the untapped potential is huge.”